With the new year well under way we have been considering how to take the enterprise forward. Late last year one of our regular workers decided to follow other interests namely producing his own local cider
This leaves us short when it comes to producing the field crops such as Leeks Sprouts and Carrots etc, so one of our options is to concentrate on the more high value crops, of Garlic, Salads, Spinach, Tomatoes and Lettuce. Added to this the fact that we are over 600feet up does reduce the quality of our late winter crops. So the Leeks and Sprouts will be confined to pre-christmas crop.

This year we have seen a massive rise in rabbit damage despite having had the bank worked by Ferrets, so much so that as soon as we remove any covers the crop underneath is wiped out within a week. Another factor in reducing the number of field crops.

The Sheep will be increased, not because of their profitability but I just like working with them. Related to this the new sheep dog Shiv is coming on well, she is pictured in the previous post during SOGS visit much improved from the frightened and cowed dog when she first came. Shiv was abused when a Pup and still has issues with strangers especially women but is steadily improving.

The Cafe is open and slowly getting established although much quieter in the winter.

Our Market stall in Shrewsbury covered market continues to be our main outlet for retail sales and we will be redesigning the look of the stall in the spring.

The Bees had a hard time last year and the fall out from that is not yet over. The queen bee mate so the wing so needs favorable weather to complete the required number of mating flights. A poor summer as last year can produce poorly mated queens which may fail in March and April. Just when you think you've got past the perils on winter the colony fails due to an infertile queen. all we can do is wait and see how the colonies develop.

Last October we had a visit from SOGS. Click here to see a nice range of images. 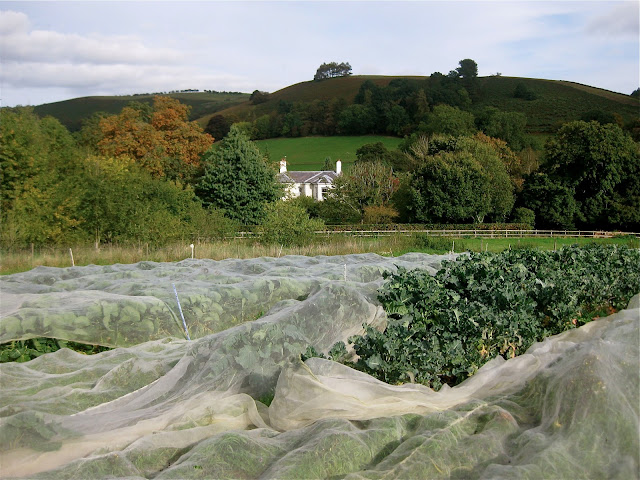